On July 19, ice cream maker Ben&Jerry’s announced that it will no longer sell its products in what they describe as Israel’s Occupied Palestinian Territories (OPT), which includes the West Bank, East Jerusalem, and the Gaza Strip. Citing the UN’s definition of the OPT as a result of Israel’s “flagrant violation of international law,” the board of Ben&Jerry’s wrote that the sale of their product in the OPTs is “inconsistent with [their] values for [their] product to be present within an internationally recognised illegal occupation.” Such action includes the refusal to renew the license agreement of their manufacturer and distributor in Israel.

It is no coincidence that this announcement was published on the heels of a tense battle between Israel and Gaza. On the evening of April 23, 2021, Hamas launched 36 rockets from the Gaza strip, inciting a week-long exchange of rocket launches and retaliatory airstrikes between Gaza and Israel. The attacks ensued in the midst of Palestinian and Israeli protests over an Israeli High Court case concerning property rights in the Sheikh Jarrah neighborhood in East Jerusalem, which is part of the UN-labeled OPT.

Ben&Jerry’s announcement to cease business in the OPT didn’t come out of a vacuum. For years, the Vermont-based company has been pressured by a pro-Palestinian group called the Vermonters for Justice in Palestine (VTJP) to cease the sale of their product in Israel.

The Vermonters for Justice in Palestine

Correspondence between VTJP and Ben&Jerry’s can be traced back to 2015, including a letter dated April 24, 2015, from VTJP informing Ben&Jerry’s of its plan to boycott the company due to its inability to “to live up to its ‘values-based’ social mission in Palestine.” On Ben&Jerry’s “Free Cone Day” on April 10, 2018, VTJP took to the streets handing out pamphlets with the message, “Stop your complicity in the Illegal Occupation of Palestine,” as well as “Free Cone Day” in 2020, adding, “Ice Cream is Free, but Palestinian People are not!” In 2020, VTJP praised the UN Human Rights report accusing the Israeli supermarket Shurfsal of “profit[ing] from Israel’s illegal annexation and settlement activity in the West Bank.”

In April 2018, VTJP began correspondence with Ben&Jerry’s Dutch-based company Unilever, urging the company “to intervene immediately and decisively, as Ben & Jerry’s parent company, to put a stop to your U.S. subsidiary’s commerce conducted by its Israeli franchise in Israel’s illegal, Jewish-only settlements in the occupied West Bank and East Jerusalem.” Justin Solheim, Ben&Jerry’s CEO at the time, sent a response letter to VTJP stating that the company’s decision to continue business in Israel and the OPTs is aimed at “encourag[ing] and support[ing] the economic cooperation between Israelis and Palestinians.” After this letter, VTJP escalated its rhetoric, labeling Israel as an “apartheid state.”

In April 2021, utilizing the publicity behind April’s Sheikh Jarrah protests in East Jerusalem and the rocket and airstrike exchanges between Israel and Gaza, VTPJ launched a campaign calling for Ben&Jerry’s to boycott “apartheid Israel.” The campaign gained over 50,000 signatures and partnered with other pro-Palestinian groups, including Guardian of the Walls, AJ+, and SumOfUs. On July 19, 2021, Ben&Jerry’s officially published their statement ending the product sales in the OPTs.

The question remains—why now? Correspondence between Ben&Jerry’s and VTPJ clearly shows the ice cream giant’s strong stance to continue economic partnerships between Israel and the Palestinians. It seems unlikely that their statement, even given April’s escalated tensions, resulted from merely caving to the social pressures of the time. A closer look into Ben&Jerry’s board members indicates that April’s tensions provided an opportunity to push a pre-existing pro-Palestinian agenda.

Anuradha Mittal, Chairwoman of Ben&Jerry’s Homemade Inc.’s board of directors and Vice President of the Ben&Jerry’s foundation, has not only taken a public anti-Israel stance for years; she has also utilized her position with Ben&Jerry’s to direct funds to her own anti-Israel and pro-Palestinian projects. Mittal founded the Oakland Institute policy think tank which is well-known for its strong anti-Israel stance. In 2018, Mittal helped author “Palestine for Land & Life” for the Oakland Institute, a series containing 9 different reports accusing Israel of being an apartheid, colonialist and land grabbing regime. In 2018, Ben&Jerry’s made a $3,000 donation to Mittal’s Oakland Institute earmarked for Badil, a Palestinian organization dedicated to the Palestinian right of return.

On November 6, 2019, Mittal tweets her support Omar Shakir’s call to boycott all of Israel, which, Mittal ironically says is not a “boycott of Israel” but rather a call for “businesses to fulfill their human rights responsibilities by ending ties with illegal West Bank settlements.”

.@OmarSShakir “never deviated” from its policy on the issue — which, according to @hrw “does not advocate a boycott of Israel but urges businesses to fulfill their human rights responsibilities by ending ties with illegal West Bank settlements.” https://t.co/8rJQrVwKFp

On June 9, 2020, Mittal calls to “End Occupation of Palestine,” which entails the dismantling of Israel as a legitimate nation.

And End Occupation of Palestine https://t.co/gaqkZmdUck

Ben&Jerry’s decision to cease sales to the OPTs resulted from a two-pronged battle that converged with April’s tensions between Israel and Gaza. On the one hand, activists like the VTPJ utilized the escalating tensions and global anti-Israel rhetoric to pressure Ben&Jerry’s into their agenda. On the other, board members like Anuradha Mittal with a history of anti-Israel sentiment took advantage of April’s tensions to pull the final plug on Ben&Jerry’s relationship with Israel. 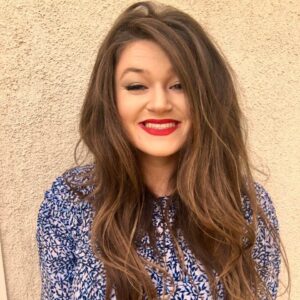 Katarina is a project manager with The Dark Wire and oversees The Dark Wire internship program. She holds a BA from Hillsdale College in Philosophy and German and is currently finishing her master's from the University of St. Andrews in St Andrews, Scotland. As a former White House intern and having lived in both the UK and Germany, Katarina's interests include foreign policy and U.S.-E.U. relations. Follow Katarina on Twitter: @KatarinaBradfo1
PrevUS Outreach to China Undermined by CCP Media
Republican COVID-19 Origins Report Strengthens Lab Leak TheoryNext